A Brief Synopsis on the Historical Precursors to Civil & Common Law: Christianity

There is no need to delve into a religious, philosophical, moral, or even a historical analysis or discussion on the origins of Christianity,[1] except to say that it began with the death of Jesus of Nazareth in roughly 33 AD.  I must also clarify that the summary below is an exceedingly brief synopsis of only certain relevant events related to Christianity and is by no means meant to be comprehensive.

The importance of Christianity for our purposes here is its conversion into the official religion of Rome (which was a pagan society up until that point), its subsequent spread throughout the entire empire, east and west, and its impact on every single aspect of human life for almost two millennia, especially during the Middle Ages.  The Catholic Church was the most important and, at its height, arguably the most powerful institution the world has ever seen.  However, there are only a few relevant aspects worth mentioning: 1) the intricate organization, infrastructure, and institutionalization of the Church which would spread throughout all of Europe and into all areas of daily life, 2) the constant power struggle between monarchs and popes, and 3) the Church’s influence on government and the law, which is referred to as “canon law.”

Once Constantine converted to Christianity in 312 CE, the infrastructure of the Catholic Church began to form, and when it was made the official religion of Rome in 380, the Church really began to flourish.  Many pagan alters and other sites devoted to pagan gods would be converted into Christian churches or other Christian sites, and several pagan holidays, including Christmas and Easter, would be repurposed and adopted by Christianity.  After the so-called fall of the western part of the Roman Empire, the once mighty Roman infrastructure was slowly replaced by an ecclesiastic one.  Many of the different barbarian or Germanic tribes had already been introduced to Catholicism through missionaries,[2] and subsequent generations of these barbaric pagan tribes, who had already established new kingdoms (Francs, Visigoths, Ostrogoths, Britons, Angles, Saxons—to name a few), would also slowly convert to Christianity. 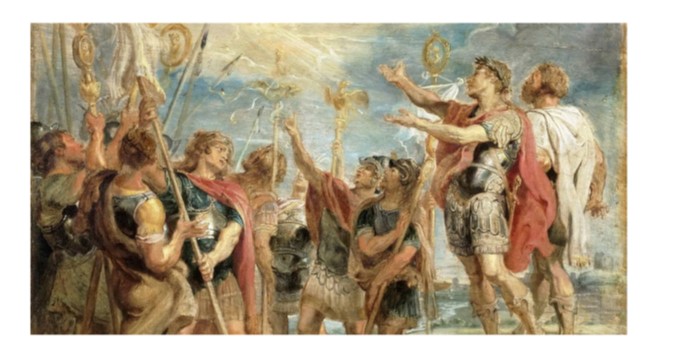 At the center of the Catholic Church was the Pope, or the Bishop of Rome (although for several centuries the Pope did not actually reside in Rome), who was considered the spiritual leader of the Church.  As Europe continued to transition from the Roman Empire to regional kingdoms, an interesting dyadic relationship developed between a king and the Pope, namely concerning who was the more powerful.  On the one hand was the king, who was the head of a kingdom and had military power; on the other was the Pope, who wielded spiritual power. Several conflicts would ensue between these two figureheads that would lead to bloody disputes.  For example, in the sixth, seventh, and eighth centuries, Popes were theoretically elected by locals, but each elected Pope had to be confirmed by the Byzantium Emperor, i.e., the Eastern Roman Emperor.  Without imperial approval, the Pope would most likely be deposed and killed.  At the other end of the spectrum was Charlemagne, who would be given the title of Emperor of the Holy Roman Empire by Pope Leo III on Christmas Day, 800 CE.  These events, and many other similar ones, would define and shape the power struggle between religious and secular rulers for centuries.

By the time of Charlamagne, Christianity had spread throughout most of the eastern and western half of Europe and was literally the center of all aspects of human life—art, architecture, education, government, and law.  At its peak, the Catholic Church exerted unbelievable power over its followers and had developed a highly sophisticated legal process.  Canon law refers to this legal system developed by the Catholic Church throughout the Middle Ages.  There were laws, codes, courts, judges, and lawyers all specifically attributed to cannon law, which would have jurisdiction over all Church matters and also civil and family matters, such as marriage, divorce, adultery, succession, and probate law.  Members of the clergy usually held government offices and had significant authority over religious and secular life.  This would necessarily lead to substantial corruption and would blur the lines between secular and religious authority.

By the fifteenth century, the Church had enjoyed several centuries of power and control over European life, which is the world into which Martin Luther was born in 1483.  Luther was an extremely devout Catholic who as a young man decided to leave his studies as a lawyer and devote himself to the Church.  A fateful trip to Rome in 1510 would change Luther, and eventually the world, forever.  Despite falling in love with the city’s beauty and splendor, Luthor immediately noticed the corruption and immorality of Church authorities.  His dismay eventually led to his drafting of the 95 theses, or questions directed toward the Church and the Pope, challenging Church teachings.  This, among several other events, would culminate in a religious chasm that triggered Protestantism.[3] Luther’s ideas may not have ever spread as quickly as they did, or at all, had he lived even a century earlier.  The invention of the printing press in the mid-fifteenth century increased the demand for literacy and the mass production of books throughout Europe.  It also triggered the translation of the Bible[4] and other theological texts (such as the City of God,[5] written by San Augustine, the Bishop of Hippo, in the fifth century CE) into several different languages, resulting in laypeople gaining personal access to the Bible. Previously, this privilege was reserved to only the learned clergy who spoke and read Latin, but with the Bible having been translated into more conversational languages, anyone who was literate was able to read and interpret the Bible. 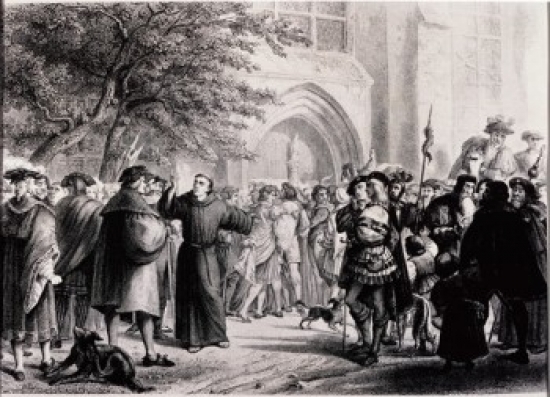 All grievances expressed by Martin Luther in his 95 theses were either directly or indirectly related to the conduct of Church officials, including the Pope, mostly in reference to the Church’s abuse of indulgences—an offering made by the Church to absolve or remit a person from sin in exchange for a money payment. It was a common belief throughout the Middle Ages that a person’s sins could not be fully absolved through penance during that person’s lifetime, which gave rise to the belief of purgatory, i.e., a hell like place where people would go upon their death and remain until their sins were fully absolved.  An indulgence was therefore a crafty tool used by the Church to gain even more power, money, and influence over believers.[6]  Although it was not his intention, as Martin Luther was and remained a devout Catholic his entire life (despite his excommunication in 1520), his 95 Theses would eventually ignite the Protestant Reformation movement, leading to the Church of England after an ongoing dispute between the Pope and Henry VIII led to the latter’s rejection of the Pope’s authority and eventual split with the Catholic Church.  It also resulted in many different protestant sects defecting from their home countries in Europe, where the Catholic Church still reigned supreme and made drastic attempts to quell all forms of heresy, in search of religious freedom in the New World.  This, in turn, would lead to, at least in part, to what we now refer to the “freedom of religion” provision found in the First Amendment to the U.S. Constitution.

[1] For our purposes here and given that Christianity was basically one religion at this time without any real divisions or sects, I will use Christianity, the Catholic Church, or the Church, Catholicism, and Christians and Catholics, interchangeably.

[2] Saint Paul is probably the most important and well-known Christian missionary.

[3] In its broadest meaning, a protestant is one who is not a Catholic (or Eastern Orthodox) practitioner

[4] Which Luther assisted with—he translated the bible into German

[5] This link is to the Wikipedia page, which includes links to English translations of Saint Augustine’s most influential work and resources for further reading, including this summary written in 1983 by James J. O’Donnell of Georgetown University.

[6] The remission of all sin through indulgences was also used by Popes as a recruiting tactic for the Crusades.